Wine Bottles come in a range of sizes and shapes, they are largely standardized to the range listed below. However wine producers can bottle their wines in any size and shape of bottle that they choose. The names of the bottles tells a story of their origin or can be named after biblical characters.

The twelve standard sizes of wine bottle range from just 187ml to 18 litres. Currently there is legislation in the European Union that sets a limit of 10 litres for still wine and 9 litres for sparkling wines though this is not a global limitation.

For Wine Bottles up to 3 litres they are named after the region that they were most common or are simply named after their sizes. Larger bottles that are over 3 litres are named after biblical figures. The origin of this convention appears to come from a French tradition, The region of Champagne adopted the Jeroboam size and followed suit with larger format bottles developed in the 1940’s, continuing the practice of selecting biblical kings and patriarchs.

Demi or Half: 375 ml Equivalent to a half a standard wine bottle

Standard wine bottle: 750 ml The bottle that you will most commonly find on the shelves of your local wine retailer, usually either in the Bordeaux or Burgundy style bottle.

Magnum: 1.5 litres Holds the equivalent of two standard wine bottles, Magnum means Big or Great and is of Latin origin.

Jéroboam: 4.5 litres Holds six standard bottles of still wine. For sparkling wine a Jéroboam usually has the capacity of a Double Magnum and a 4.5-litre bottle for champagne and sparkling wine is called Rehoboam. 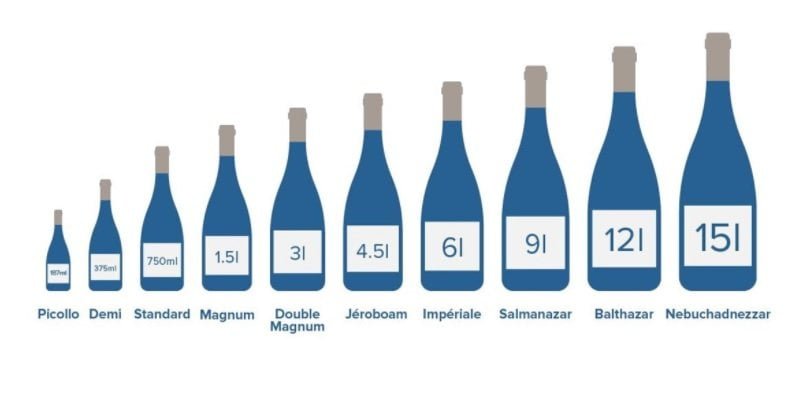 Get in touch with us for the best quality Wine Racking, Storage and Accessories.

If your would like to ask any questions, clarify anything that is unclear, resolve any issues or just for a chat, then you can contact us by phone or email.